Climbing the fraternal ladder to become the Uno Numero is a dream many within UCGFs harbour. Any decent fellows whosoever wore the crown at the top of the fraternal ladder did so most reluctantly and without campaigning in elections for the spot, lobbying pernicious cliques that hold power or even doing the job at all when sworn-in. Those who sit at the top of the ladder through nefarious ambition would typically have an easily provable long history of psychopathy, a reputation for personal intellectual confusion, embody hopes of grandeur and display deep-seated admiration/desire for ruthlessness. For in their own eyes, the evil of the UCGF is useful to society and humanity as a whole.

The man bent on becoming the Uno Numero of a UCGF put in all his expendable thoughts and energies into fulfilling that dream. It is this very ambition of the fraternal ladder climbers that keeps the UCGF going and growing. The UCGFs do not grow through the bona fide or favourable but unconventional conditions of progress but purely through arbitrary agreement and wanton expediency. Michael Corleone, who could kill his brother or friends to achieve absolute power, becomes the prototype for the “brother” who wants to sit at the top of the fraternal ladder.

It is a great blessing to UCGFs in Nigeria that the Nigerian Police Force and its forensic capabilities are very far behind the basic acceptable global standards. Many controllers of UCGFs would have been hung or serving life sentences without parole for their sins. The handful of men that own the UCGFs by way of a very perverse status quo and feed fat from it financially allow the arbitrary governance and expediency to reign unrestrictedly for good reasons. Firstly, if UCGFs dedicate their time to sincere management by a thoroughly decent internal ‘rule of law’, the laws upheld and enforced would enable the general membership of the fraternities to kick out any abusers and misusers of the system. Even their “spiritual heads” and the conclaves that support them. They hold elections to vote in top dogs who then govern with autocratic certainty, another kind of one-party system with an unelected patrimonial supreme head to answer. Secondly, evil, ambitious men, as a rule, are more willing to break the rules brazenly to protect the perverse status quo, as a condition of climbing to the top of the fraternal ladder.

It becomes clear that those who are ambitious to become the top shots of the UCGFs instead of being cunning and ruthless at their levels are slow-thinking upstarts. They are subtly used by the few men who own the UCGFs to do their filthy and obnoxious work. The poetic justice that emerges is that the ambitious ladder-climbers only realise their untold sacrifice and folly, after sitting at the very top of the fraternal ladder and left it. The realisation is harrowing for some. Excellent and reliable friends nastily betrayed, bright lights dismissed or derided, notable projects sabotaged, reason and common sense burnt to ashes for the ascendancy of folly, criminal activity celebrated, rape a show of genuine manhood and so forth and so on. The pain is in the question, “why did he enforce and support such despicable deeds?” Power!!!

Nevertheless, the perverse status quo continually grows more sinister and toxic with time because increasingly the tell-tale signs, psychopathy and crookedness, are now the desirable requirements for initiation. A rookie with a personality disorder has a bright future and starts his climb to the top from day one. The depth and scope of evil practices and manipulation by those few men who control UCGFs have evolved beyond their own wildest dreams. The conventional wisdom is, if you want a bully, an assassin, a thug, a psychological abuser or a spy, recruit one or many. The days when good grades and unqualified good character were the main criteria for initiation into UCGFs are somewhat prehistoric today.

As members of UCGFs rise to the top of the fraternal ladder and see the mirage, the nothingness of their achievement, they look to their counterparts who have climbed to the top of one of the many transparent social or professional ladders in society and call them ‘lucky’ with emotional emphasis. The money they steal while in office from the UCGF and its members is no satisfying compensation or comfort. Whether being lucky in this sense is climbing to the top of the ladder and getting something worthy and tangible for it. Or is not having to be so nasty to achieve virtually nothing or anything at all, who knows.

Being a ‘King of Nothing‘ is quite a feat, especially while being so destructive to achieve it. Or what do you think?

Prickly Heat: I just tested HIV negative. The test was requested for the new job I will start in the Middle East. I was really scared but I have come out all okay. God is great. END_OF_DOCUMENT_TOKEN_TO_BE_REPLACED 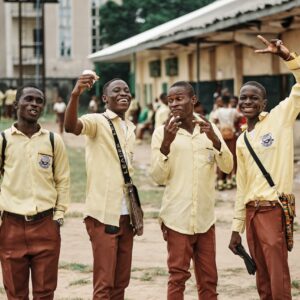 When I wrote the articles Getting Ready to Islamise Nigeria? (http://wp.me/p1bOKH-BE) and The Complaints: Getting Ready to Islamise Nigeria? (http://wp.me/p1bOKH-BT), it was taken by many as mischief with a keyboard or a pen. Muslims denied any attempts at an Islamisation of Nigeria and Christians compatriots said it was neither possible nor even thinkable. As I have said before the Islamisation of Nigeria will be ‘structural’ or ‘institutional’, not ‘martial’ as some unwittingly expect. Christian Religious Knowledge (CRK) is now being completely removed as a subject from the national academic curriculum while Islamic Religious Studies (IRS) and Arabic Studies (AS) remain. Why not ban Use of English Language from the curriculum too? History was taken out some time ago. END_OF_DOCUMENT_TOKEN_TO_BE_REPLACED

END_OF_DOCUMENT_TOKEN_TO_BE_REPLACED

Corruption takes place in every nation and at all levels in systemic and non-systemic forms. To compare corruption in Nigeria with that in Britain is equivalent to an episode of severe schizophrenia. Capital flight, as it functions in the arena of corruption, happens due to politicians in unstable economies and where the monies can be seized; the wealth is then taken to a “safe haven” nation [in Europe, America or the Middle East] that has a stable economy and the wealth safe from expropriation by nations of origin. Corruption and capital flight has damaged Nigeria perniciously, when will it stop? END_OF_DOCUMENT_TOKEN_TO_BE_REPLACED

The word “stone” is a very ominous one that conjures up exclusively many meanings and images of violence and immorality. The emphasised passion with which the First Lady uttered the statement is reminiscent of people praying for fatality to happen to their enemies in the ‘return-to-sender’ fashion. It betrayed a violent consciousness in Nigerian democratic politics that politicians are by keen self-regulation forbidden to reveal and therefore a characteristic of Nigerian politics ‘in private’. Cases of Freudian slip (utterances due to psychological mix-ups) or Kinsley gaffes (truths uttered by politicians in public by mistake) are rare in Nigerian politics. END_OF_DOCUMENT_TOKEN_TO_BE_REPLACED At the moment the Urhobo nation is both essentially saviourless and leaderless, forget the ethnic bosses. Chiefs Mukoro Mowoe, Michael Ibru, David Ejoor, Great Ogboru, and James Ibori have all been arguably seen as saviours of the Urhobo nation. However, only the legacies of Mowoe and Ibru remain as genuine saviours unperturbed and Mowoe the singular unobstructed unifying leader of Western, Central and Eastern [Isoko] Urhobo. This is shocking considering that Mowoe, the foremost Urhobo nationalist and first president-general of the Urhobo Progress Union (UPU), died 70 years ago. This no disrespect to (Urhobo Progress Union) UPU and its host of influential leaders. The Urhobo people have produced many illustrious sons and daughters in many endeavours of life, some even rivalling in achievement the five named saviours. One may wonder what it is that distinguishes these five men as saviours to Urhobos but not necessarily leaders? END_OF_DOCUMENT_TOKEN_TO_BE_REPLACED