It is certain that “access to drugs” policies have been mostly responsible for either a rise or decline in the demography of drug addicts in Nigeria. A controversial thing the Obasanjo military government did in 1976/77 was to progressively ban many goods [including controlled substances] into Nigeria to curb the wanton and wasteful “Import or Die” phenomenon triggered by the unexpected “Oil Boom” years governed by General Gowon. The first experience of a drug culture in Nigeria, though very limited and short, was a creature of the frenzy of Oil Boom importation. Some will argue the ban’s impact on drug use was inadvertent or even nonexistent. Nigerians then did not have to escape reality though; life was good and masses sought conspicuous consumption and luxury. When the ban on imported goods came into effect the drug abuse phenomenon faded like a fad but created smuggling boom in which smugglers found Veblen goods like lace and refined stills  far more profitable. It is ironic that the viral drug problem of today’s Nigeria is fuelled by poverty, the demands of socio-economic survival and very harsh realities. The recent ban of codeine-based cough syrup by the Buhari administration after the BBC’s damning expose, Sweet Sweet Codeine will have nothing like the impact of the ban put in place by Obasanjo in 1970s. The present drug problem has now reached a high point after a long surreptitious build up; all presidents since Babangida reportedly created the Nigerian Narcostate have allowed the problem to fester. I will share my witness. END_OF_DOCUMENT_TOKEN_TO_BE_REPLACED 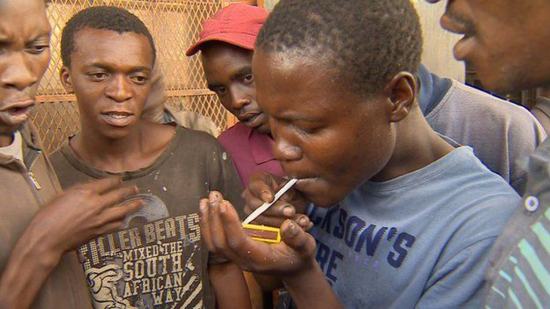 Take a very good look at the photograph. In the photograph you can see the portrait of a young teenager in a blue T-shirt (the Boy in blue) attempting to light up a reefer. He is closely surrounded by peers eager for him to do it because if he does they can too. There is some apparent awe for the Boy in blue by his mates; he is their leader by choice or nature. He is definitely not from a privileged background and neither are his peers but they look up to him. Leaders instinctively know their followers expect them to be first movers and hardly backdown. With the provision of privilege or means he could be a future captain of industry, senator, Anglican bishop, colonel, principal or publisher. Who really knows? What will be the use of the Boy in blues’ leadership appearance or qualities in the present and future Nigeria society? Who exactly is the Boy in blue and where can he be found? END_OF_DOCUMENT_TOKEN_TO_BE_REPLACED