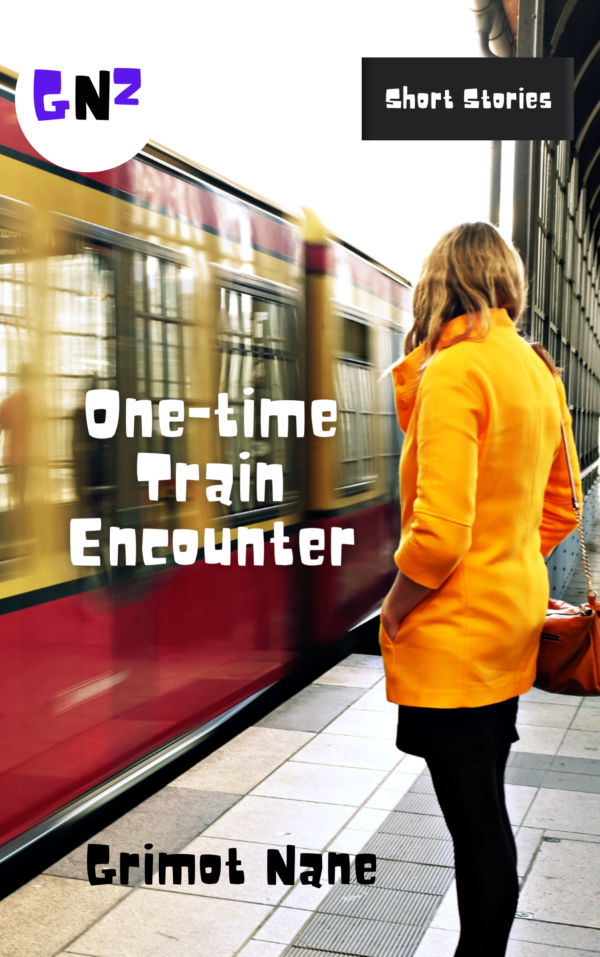 Victoria Station has always been an underrated masterpiece of London. Imagine London without it; I won’t. The sun was glaring outside the station that morning, but not giving London any sensible warmth. The warmth was to come later, possibly with love. Albanny Korrow, like most other males on the train platform, was wearing bi-thermal attire, which could be practical in both mild summer and mild winter weather. Albanny Korrow, a dark-skinned man, was wearing his most predictable outfit; suede wallabies; brown corduroy trousers, shirt, and jacket, but of different shades of each other. Even his satchel-bag and suitcase were brown. As he was about to embark on the train at Victoria station, one of the many ladies around had in an instant bewitched him without his seeing her face.

The lady was tall, blonde, of average build, and unusually dressed. She wore a bright yellow bi-thermal and sporty all-weather coat which had multiple detachment zips; The coat she could wear as a knee-length coat, a jacket, or a gilet. Her footwear was orange converse, leggings were dark purple, and her skirt was blue jeans. Her dressing hinted she might be a colourful personality.

The curiosity of her clothes caught Albanny’s consciousness. He could later see her face and the trendy grey jumper she was wearing over a good bust. He knew he had seen her before; they had both been at an auditorium together for a few hours for a seminar at King’s College. Albanny’s memory was quite good; he never forgot faces, real or virtual. The lady in the yellow coat was even his friend on LinkedIn, but they had never spoken to each other. Albanny was very active on social media and had 4000 contacts on Facebook, 2000 on LinkedIn and 6000 on Twitter.

On the train, they sat opposite each other, something he had calculated in advance to share the journey with the lady in the yellow coat. She smiled out of courtesy at Albanny. In his mind, he mused, “Why do you enchant me so with your smile,” and smiled back. The lady’s lips, smiling or not, were tempting for Albanny; fantasising about them would only end up flogging him with desires, a wet mouth, itchy back and heavy breathing. Albanny and the lady could not wait to use their iPads or tablets as the train pulled out of the station.

Albanny logged straight into the LinkedIn account and saw her name and picture. She was Sinead Hay, professor of visual sociology at Goldsmiths College, University of London. Sinead was checking her emails while Albanny added her as a Facebook friend. Within a few minutes, she had accepted his Facebook request without noticing he was sitting right in front of her. But his Facebook profile picture was of his late dog, Dokkie.

One of Albanny’s bad habits was he would stare to the point of excessiveness at anyone or anything that caught his fancy. Some of his friends called him “Notey Al” [often pronounced Notial] because he seemed to make copious mental notes of things that captivated him, rendering him oblivious to anything else around. Sinead was his latest fascination. She appeared approachable, but the expression she wore would make children or subordinates behave. Sinead’s dress code was not congruent with the power and authority she exuded without trying. She looked like a parliamentarian in a hipster’s clothing.

However, another bad habit of Albanny was his incurable proclivity for “pranking”. Albanny lived by high personal moral standards but lost his sense of morality when playing pranks on people. He had lost many friends and had swarms of enemies who wanted to even the score with him for his shattering pranks. As close and pampering he was to Dokkie, the dog bit Albanny on two separate occasions in response to his teasing.

She was uncomfortable with Albanny’s ceaseless staring and launched a message on her Facebook page which read, “This African guy is sitting opposite me and staring at me with Orwellian eyes. I wonder what he wants?” Albanny saw her Facebook comment and smiled behind his face. He then introduced himself to Sinead.

“Hi, I’m Sinead, grand to meet you. How are you doing?” she replied.

Sinead inspected him and then commented on her Facebook page. “This African guy sitting opposite me thinks he is Irish or is showing off his knowledge about the Irish.”

Albanny, an ardent Hibernophile, had Irish blood from three generations ago and liked the way the Irish used the words “grand”, ‘the best’, and “aye” in exchanging pleasantries. He also knew several unique Northern Irish phrases. It did not take Sinead long to follow up her initial Facebook comment with, “I hope this guy will not attempt to chat me up, he is not only staring at me but be is trying to get friendly.”

Albanny had to keep the conversation going before she started ignoring him. He liked her and wanted her attention. Albanny, seeking to be more significant to her, asked Sinead a question.

“Are you off to Toronto?” he asked.

Her eyes narrowed, forehead creased and lips tightened. She took in a deep breath and exhaled with slow ease.

“Why did you ask that?” she asked.

“Oh! I am an amateur dress code analyst and I can often tell where a British person is travelling to by their dress code alone,” he said.

“What if I am going to pick up someone at the airport?” she asked.

“I see you are not carrying any luggage, but I would not dress you like that for a meet-me-at-the-airport engagement,” he replied.

The tensions on Sinead’s face eased and a brief glow emanated from it.

“You might have a point there. I am going to Toronto,” she said.

Albanny Korrow was no fashion expert; he saw her destination on her Facebook page and her thanks to her friend, Darusia, for taking her luggage for her to Toronto the previous day.

Sinead, now affronted Albanny, leaning forward, and it seemed natural to her.

“Why have you kept your eyes on me since we got on the train?” she asked.

“I have an aesthetic dysfunction in my brain. And I often get visually mesmerised by special people and special things. Perceiving only, I do not objectify or judge what mesmerises me,” he said.

Sinead liked Albanny’s remark and commented on her Facebook page.

“At least the guy opposite me is interesting to talk to,” she said.

The ticket-man on the train came up to their seats to check their tickets midway through the journey without consequence. The enjoyable ambience building up between the new acquaintances was interruption proof. Albanny and Sinead were now into each other to the point of mutual enthusiasm, but there was no friendship or romance vibe to it yet. Albanny should have attempted for romance because he was without a lady in his life and willing but as tempted as he was, a prank would do his soul better.

“Sinead, do you think I could chat up a beautiful, tall, blonde lady who exudes power and success just because we were sitting opposite each other on a train? I know my place, you know,” he said.

He was playing benign race games, but their outcomes can be unpredictable. Albanny’s misplaced and unnecessary last comment forced her lips ajar and she went on the defensive-denial mode.

“I am not that kind of person,” she said.

“Please, I apologise for projecting my insecurities on you,” he said.

Albanny made it easy for her with self-abnegation. But Albanny had gotten Sinead where he wanted her. She was now giving him unobstructed, sincere attention. She was leaning forward without a break for the first time on the train and was not even peeking at her iPad anymore.

When they both got chatting about their lives to each other, they were predictably one of those metropolitan single professionals living in London or most Western big cities; single; no kids; owned a flat with an under-used kitchen (or even under-used bedroom); fed up with lodgers; a car they never drove much; did incessant local and international travel; and concerned about their ageing parents. Nevertheless, they never discussed their love lives or careers, even though those were the two issues that have dominated their thoughts for years. Sinead was uncomfortable saying she was a professor and maybe used her unusual dressing as a distraction from the fact. Albanny, an academic, preferred the title Mister and always joked, “I do not get paid extra for being called Doctor.”

Sinead was ahead of Albanny in most things in life but age. Tough. He lost hope of forming a social relationship of some sort with Sinead. In relationship matters, he was a man of little faith.

“Why are you single? You are tall, handsome, well-educated, got good manners, well but the staring, so why?” she asked.

“Oh, thank you. I spent my youth chasing after women that turned out to be commitment-phobes, so I have myself to blame. You are delectable yourself,” he said.

Their mutual giggles in response to the compliments of eligibility they shared were masks covering their delight in the flattery.

The conversation could not continue because the train trip had ended. Moreover, there was minor chaos among passengers sorting their luggage and alighting from the train. Now both were on the platform again.

“We got on well on the train; it would be interesting to meet up again. What do you think?” he asked.

She responded by searching through her purse and giving him her business card. He had none to give. Albanny and Sinead then shook hands sharing the “warmth” the sun could not yet provide, and parted ways before they got to the airport. He would have preferred a hug so much more or walking together. Albanny had been careful to tail Sinead for a while at the airport until she checked in at a counter, passed immigration, and sat down by the duty-free shops in the departure lounge. Albanny knew they were going to fly the same plane to Toronto.

On Sinead’s Facebook page Albanny commented, “I have had a wonderful train ride with Prof Sinead Hay and must say she is the loveliest person I have ever met travelling. I will attend her plenary lecture and paper presentation at the Visual Realities Conference we are both attending in Toronto. Thus, I hope she will attend my paper presentation too.”

Albanny waited for three minutes with anticipation as Sinead found her Facebook page on her iPad. She stood up with a sudden jolt and began looking around the lounge with keen acuity. Albanny grinned with sheer happiness, and in a place shielded from Sinead’s view, smugly whispered to himself, “She is looking for me.” She sat down and looked out for him for several minutes, then began to reread the paper she was presenting. Apart from the announcements and a couple of baby cries, the departure lounge held a polite ambience borne of everyone’s good behaviour and discretion.

An hour passed like ten minutes in the not-too-busy departure lounge. Then an announcement came for passengers travelling with Flight 101 to Chicago. It instructed them to go to Boarding Gate 16. Albanny’s hour of hiding and Sinead’s hour of expectation was over. Their reconnection was inevitable. Albanny walked towards Sinead from her front. Self-satisfaction and joy sandwiched his beaming face. It was the look he wore on his face any time he pranked anyone. Love, sex, and friendship, pranking others, always came first for Albanny.

Please take a look my  other short story The Logic of One. Cheers.