On the issue of policies, Nigeria’s problem is sincerely not policies and national planning solutions for the economy, whether it witnesses continuous oil production or the ‘end of oil’; that is far too easy. One can make a list of credible sounding policies or right solutions for the Nigerian economy depending on whether the problem solver. Perhaps he or she, an economist, is a die-hard free-market advocate, a supporter of strong government intervention or is two-handed (will favour any policy selectively). Who will implement them? From my academic research experience, Nigeria scores 9/10 for resistance to policy introductions, especially when they disrupt the status quo of the Owners of Nigeria Technostructure. That is the problem.

Nevertheless, one of the most important lessons I got from studying development economics comes from an observation made by economist Peter Thomas Bauer on West African economies. He clearly stated that economies do not attain prosperity because they have “natural resources” human, mineral, agricultural; prosperity is a “function of the attitudes, behaviours, habits, dispositions and thinking” of the citizens and government. He did not see West Africa prospering for this reason, i.e. since the 1950s. When he moved shortly afterwards to study South East Asian economies, he could see the possibilities of economic miracles long before other economists for the inverted reasons West African could not be hoped to achieve such. Japan has virtually no natural resources yet because of their formal and informal culture of collective and individual efficiency and commitment, they are one of the world’s dominant economic powers.

Amartya Sen in Development As Freedom argues that nations only prosper when their government establish and foster useful capabilities in their citizens. The economics capabilities of citizens built America with the help of industrial policy. Political capabilities of Switzerland and Botswana made those nations with exemplary democracy in place. Social capabilities developed modern European countries, especially in the Northwest, by fulfilling an enabling social contract between the citizens and the government. Any nation the is determined to create enabling capabilities in their countries never leave one or the other behind. Education and conspicuous consumption kicking of with Yakubu Gowon seem to be the only positive capabilities Nigeria has.

Another issue is the history of prosperity itself. Rome of today is nothing like Rome at the time Jesus Christ’s alive. The same goes for Egypt, Turkey (the Ottomans), Spain, Portugal, Greece, Mongolia; they were once highly prosperous economic and military powers that today cannot match or resemble their past power and prosperity. When the sources of a nation’s prosperity collapse recovery, if at all possible, it is always a very uphill task. The infrastructure decays, migration and brain drain becomes necessary, postponed internal wars become fightable, ‘bottom pot’ kleptocracy gets very desperate. As economies collapse, nations collapse—even the economies of nations that never truly prospered collapse. If the end of oil does happen, I do not foresee any (easy or smooth) recovery for the Nigerian economy, especially not with the kind of elite and workers the nation has. Furthermore, economic prosperity in other ascendant nations rises from time to time, making it hard for ‘spent nations’ to reassert themselves. What are the solutions to these problems?

Many cannot believe the USA’s Midwest is producing “ghosts towns” because the one-time prosperous cities no longer have the good-paying manufacturing jobs, which have been shipped overseas in the quest for much cheaper labour. Warri is potentially a future ghost town with its loss of ‘oil city’ status; it is perhaps the first major urban casualty of oil – there are many rural ones. What policies or solutions will make such centres prosperous again? If the end of oil comes from where will prosperity come? Remember, what are Nigeria’s national and regional capabilities? The answers might frighten most.

Let us hope all will be well for Nigeria and its economy in the near and distant future.

When President Muhammadu Buhari won the 2015 general elections, he did so largely with the support of neutral and anti-PDP (Peoples Democratic Party) commentators. Everything bad in Buhari’s life history was to be forgotten and everything good was in ascendance. From another perspective, it was very difficult for practitioners of competent thinking to justify the pervasive profligacy behemoth of PDP while in power. The ministerial appointments Babs Fashola, Timi Amaechi and other ‘gubernatocrats’ that took more than half a year to make that was the start of the negation of support for President Buhari. Many thinking men deserted except the likes of Wole Soyinka turned their backs on and pens against Buhari. But many political miracles were promised by the Buhari government. Where are they? END_OF_DOCUMENT_TOKEN_TO_BE_REPLACED

“Be bold for the children of everybody and look well! It will improve our judging tomorrow” – Dan Bearman in Therefore Be Bold (by Herbert Gold)

“The young do not know enough to be prudent, and therefore they attempt the impossible and achieve it, generation after generation”. – Pearl S Buck

I support the 30PercentOrNothing movement and like its logic of participation; if the youth do not get involved in politics as voters and especially candidates they have only themselves to blame. I will rather be wrong than dismiss real and necessary potential if I can identify it or be persuaded to it. I am not naïve enough to believe the movement will succeed in its mission but I am giving it a fair chance of success. END_OF_DOCUMENT_TOKEN_TO_BE_REPLACED

The current sensation in Nigeria is the mysterious discoveries and seizures of large sums of money (mostly foreign currency) found at lying fallow at premium addresses. The cash discoveries are claimed to be the work of selfless “whistleblowers” at the encouragement of the Economic and Financial Crimes Commission (EFCC). And it is expected to show the world that the Government of Nigeria (GON) is winning on its anti-corruption campaign promises. Some highly experienced experts in the anti-corruption and crime industry find the discoveries very unlikely and too good to be true. The fantastic cash discoveries made by the EFCC credibly appear to be merely clever stage-managed acts of publicity.

END_OF_DOCUMENT_TOKEN_TO_BE_REPLACED

The recent pronouncements made by Nasir El-Rufai, Governor of Kaduna State, to “regulate” religion by banning the “unlicensed places of worship” of Christians in his state has caused many Christians to take the threat of Islamisation more seriously than ever. The threat was further escalated to an ‘imminent level’ when at a recent forum meeting for the 19 Northern Nigerian State Governors unanimously decided to regulate Christianity in their respective states. Is the “One Nigeria” doctrine again under the serious threat of failing for religion sake? END_OF_DOCUMENT_TOKEN_TO_BE_REPLACED 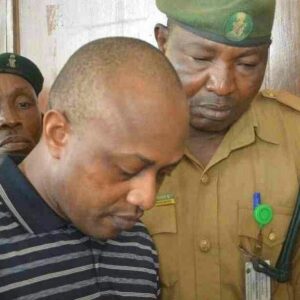 A “billionaire” kidnapper, Evans, is now the new icon shining in the dull skies of Nigeria. One may ask how a ruthless kidnapper can either be an icon or hero to millions in Nigeria? Because it is Nigeria. Claude Ake once stated that “Nigeria is the only country in the world where no one questions the source of one’s income.” The depth of the statement is far from casual or mere observation. Amassing wealth in Nigeria, whether legally or illegally, has a highly regarded and venerated virtuousness of its own. In many cases, the more crooked the source of income, the better it is rated by the public. That is why you find young men who have legitimately worked very hard for their money blatantly lie that they made the same money by crooked means. How twisted can things get? END_OF_DOCUMENT_TOKEN_TO_BE_REPLACED