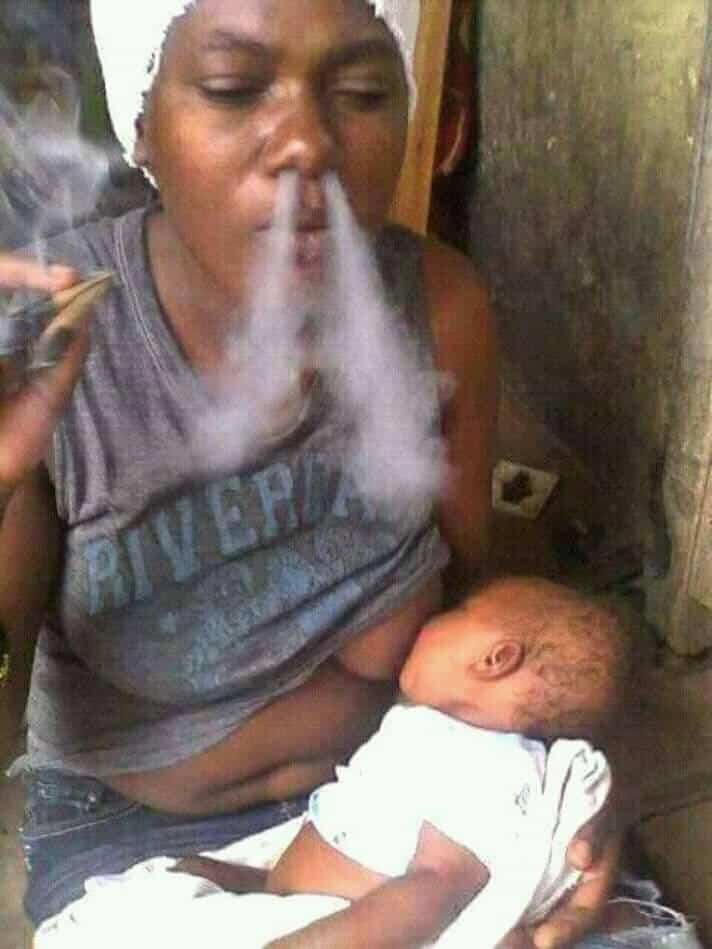 Imagine a baby just a few days or old. He or she has been crying for food endlessly, but nothing is on offer. There is no money for baby food, so the mother has to feed the child with her breast’s milk. How ever, the delay that kept the baby hungry was because she is taking time to inject, swallow or smoke drugs. The baby’s nourishment from the mother’s breast may be laced with varying concentrations of drugs. That is the baby’s meal and survival. We are not even talking about how well-fed the mother is, the child’s immunity, health and treatment if it falls ill, the environment the mother and child lives, hopes of a better life and so forth. One may further ask if the child is the only one, or the second or third or if another one is on the way? Look at the photo above, and you can see a mother simultaneously smoking marijuana and feeding her baby. It is happening in Sapele, Delta State like in many other towns and cities in Nigeria, particularly the slum areas, but the usual denial by many Nigeria is that the photo was taken in South Africa, Gabon or Chad. Drugs are not just destroying a generation of youths; it is already destroying their babies.

The youth drug problem now evident in Sapele and elsewhere in Nigeria is no longer hidden to everyday people but is still hidden from Nigerian politicians, it might seem.

Drugs are cheap and easy to obtain in Nigeria, but cheap should not be conflated with free. Even if it is N100 as dosage, one has to earn money to buy it. Such is where the female vulnerability factor arises undaunted. Drug addiction does start with a trial or experimentation, which is simple enough; the problem begins when habituation sets in. Pimps around the world have long known to get women addicted easily to make them compliant to work in the sex trade. However, according to Ejorheya Brighademo based in Sapele and works in the tourism industry, female youth addiction is not really about prostitution. The drug addiction is about “escape from extreme socio-economic hardship”, says Brighademo. There was a time when “goscolene” (the IUPAC name for ogogoro) did the job; now it is drugs.

Before we get self-righteous and blame the girls doing these drugs and having babies, what are their circumstances and motivations in life. Many are secondary or even primary school drop-outs mainly because their parents or relatives could not afford their school fees. Those with secondary education have no support to go further. Sometimes there is no money even to learn a trade like sewing, hairdressing, nail techniques, make-up, baking, event decorations or the like. Some cannot also get an N5,000 loan or grant to start selling food or water, in-house or elsewhere. Due to their poverty, they do not dress well enough to attract the attention of men with even modest cash. Prostitution amazingly does not work for them. Why would it? They cannot afford the hairstyles, cosmetics, clothes and shoes that would make them eligible prostitutes. How much hope is this for female youth and we are talking about several millions of them in Nigeria; though many are not addicted yet, we hope they never do. “Escape by any means necessary” would look irresistible to human beings in those circumstances.

Poverty has made many fathers of these youths’ babies abandon them and their mothers, or sometimes the grandparents they live. What seems just as disturbing is that while some of these female youths are having babies, their mothers also have babies and living often in acutely overcrowded single room accommodation or similar. The relevant statistics about these births and their living circumstances need collecting to give an exact picture. Informal begging to eat is a daily or hourly chore. “Bros, find me small thing/change now” or “Sister, na die I dey, anything for me at all?” or shed tears that solicit questions that enable them to respond with begging. Hunger does eventually strip people of their dignity.

After taking the drugs and the young females fall prey to reckless sexual and moral misbehaviour, most drug addicts do. The young men are no different. Sex for these young females becomes a thing of the moment, faceless encounters; who with, how good or where does not matter. What does matter is that pregnancies do result from such behaviour frequently? No money for abortions. No identity is attributable to the fathers. No reputation the family of an identifiable male father his family will tolerate. The young female is on her own. Even if parents and grandparents allow some of these females to live with them, verbal abuse can be torture itself. The lucky few of these females find themselves years later as citizens in Diaspora, with their shops in Lagos, with a higher education qualification, a career and a husband. But these are the 1-4% lucky ones. The rest, the majority have nowhere to go and nothing to do, no remedies, no hope—drugs, the temptation of awaits many of them them.

Nevertheless, the drug addiction problem Nigeria especially as it plagues youths and females is not in the consciousness of the Government of Nigeria, expecting it to be their political priority is like being addicted to drugs oneself.

The solution is the establishment of multi-functional community self-help centres in Sapele to address and clean up the youth drug problem as well as manage the welfare of the babies in question in the town. Other towns or parts of cities in Nigeria should think and act along the same lines. If the government cannot do its job, we the people should do it for them. And we can. It will be an uphill task, but again it can be done. Fejiro Oliver of Secret Reporters recently wrote about his utter disillusionment with the Urhobos (his full heritage) and his embrace of the Anioma people. He cited his betrayal by Senator Ovie Omo-Agege as the reason for his chosen ethnic preference. He was poached by Omo-Agege from NTA to be a staff writer with Urhobo Vanguard newspaper set up to assist Omo-Agege in his gubernatorial ambitions. When Fejiro was kidnapped in Niger State for investigative journalism in 2014, Omo-Agege and the entire Urhobo nation turned their backs on him giving mostly unbecoming excuses. END_OF_DOCUMENT_TOKEN_TO_BE_REPLACED

Even though President Muhammadu Buhari was riding on a high crest of fame and popularity during the Anticorruption Summit held recently in London, it was evident it would not last for long. Buhari used that momentous platform to assure Nigerians (and the entire world who were keenly watching) that the list of names of Nigeria’s big thieves (past and present) and their stashes will be “revealed” to the nation on the 29th of May 2016. The President did address the nation as promised but was silent on the promised “revelation”. Buhari should be thanked by Nigerians for saving “One Nigeria”. END_OF_DOCUMENT_TOKEN_TO_BE_REPLACED

When sociologist Donald T Campbell came up with his eponymous Law, one wonders if he expected it to be of theoretical or practical use. Campbell’s Law states that “the more any quantitative social indicator is used for social decision-making, the more subject it will be to corruption pressures and the more apt it will be to distort and corrupt the social processes it is intended to monitor.” Originally intended to measure crime rates and other social phenomena, it has been in also in use in corruption studies. Tony Blair, as Prime Minister of Great Britain, is exemplary as a textbook case of Campbell’s Law.

END_OF_DOCUMENT_TOKEN_TO_BE_REPLACED

To say that the Government of Nigeria (GON) handles issues of the military of nature with either weak short-term “quick fixes” or opportunities for “melees” is not mere criticism. It is a record of innumerable failures and blunders that should not have happened in the first place. Bombing oil bunkering assets in the Niger Delta is the latest short-term military quick fix adopted to deal with oil bunkering. What are the potential likely consequences of the GON continuing to bomb in the Niger Delta in the name of eradicating oil bunkering? END_OF_DOCUMENT_TOKEN_TO_BE_REPLACED

Between 1999 and 2007 there was an acute frenzy of political aspirations occurring among Nigerians in the diaspora; it was quite an evident wave. The frenzy was about Nigerians seeking to return home to go successfully into politics and hold office or get lucrative contracts from the government. Pre-1999, many if not the majority of Nigerian males in the diaspora were quite content to live indefinitely overseas but after the 1999 return to democracy, it was rare to find a Nigerian male who was ‘away’ that did not want to return to Nigeria to make it big. That was the birth of the “X say make I come home” era. END_OF_DOCUMENT_TOKEN_TO_BE_REPLACED 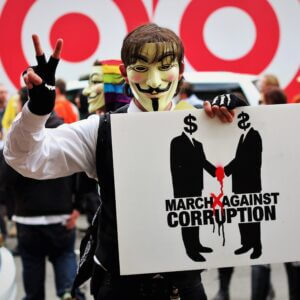 Corruption shows its face unobstructed in most forms of social organisation in today’s world. Under the present rules of governance, they license corruption for use with discretion and embed itself deeper in societies, eliminating most opposition to it. Corruption is thus now legal, though not without illegal consequences. Nothing paves the path for needless and preventable wars, social strife, starvation, pestilence, economic chaos, systemic deficiencies, and emergencies as corruption does. END_OF_DOCUMENT_TOKEN_TO_BE_REPLACED