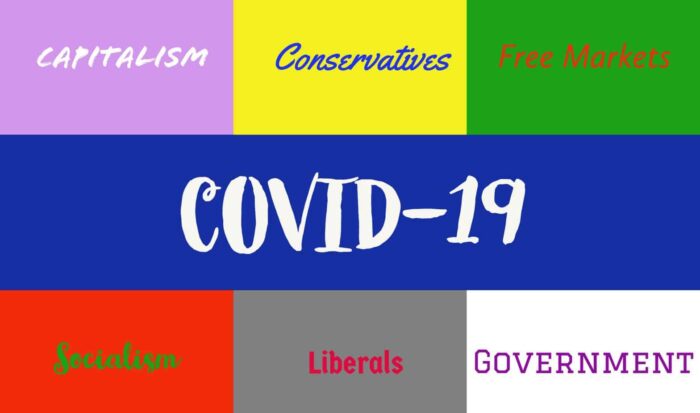 Ideology can be such a blinding and narrow-minded state of mind, individually or collectively. Accurate history informs us that plagues and pandemics have devastated the world several times and for millennia, long before socialism and capitalism came into existence and the human race is still here. But not because of the excessive passions that drive ideology. My conservative friends of Nigerian origin seem to think otherwise.

I find it bemusing that Africans who in effect have nothing of comparative pride to conserve in a thoroughly globalised world are self-proclaimed diehard conservatives, especially the ones that continuously deny everyday realities as gallant defenders of their beloved ideology. There is nothing wrong with adopting ideas and beliefs as long as they are useful and corresponding to one’s existence. I would like to know what African conservatives actually conserve because from where I stand it is just a “cut and paste” ideology that cannot graft well into the African experience.

In February 2007, I went to the Peak District, the UK for a weekend break with my partner. I stumbled upon Eyam (pronounced Eem), a tiny village in Derbyshire, with a distinguished place in British history. Under the leadership of a pastor, a wagon carrying fabric from London brought the Great Plague to Eyam; the Bubonic started near there. When the symptoms and the first deaths occurred, the pastor, William Mompesson, demanded the village adopt self-isolation from the rest of Derbyshire to prevent it’s spread. Food and supplies for the villagers had to be delivered without human contact, i.e. as drop-offs. It was a great sacrifice and prevented the Plague from spreading into that region, saving thousands or millions of lives. But many died in Eyam, paying the cost of preservation. One would think that in a pandemic, preservation would take priority over conservation.

The deviant part of the story was an LSE free-market economist published a paper on their website denying the Plague event in Eyam using ration choice and free-market argumentation. He regarded the story as fiction if not apocryphal. He argued that people are too selfish to make sacrifices for others! Perhaps human beings are such expedient spontaneous maximisers they have no sense of synergy teamwork, collaboration or cooperation in times of danger, disaster or distress. There are not many historical deniers who are not conservatives; the holocaust, ethnic cleansing, slavery, planned famine, planned families (eugenics), planned poverty, the use of dungeons etc. have routinely been denied by conservatives. European and American conservatives have things to “conserve”; their societies, way of life, bloodlines, wealth, rights, privileges, and language. Now my African friends in the name of “conservatism” are denying the realities of the Covid-19 pandemic as if it conserves something for them.

The real common sense about Covid-19 is that the world has learned from the techniques and policies found in recorded history that helped overcome pandemics and epidemics in the past. Social distancing, lockdowns, burning of contaminated fabrics (smallpox), improved sanitation, sterilisation, disinfection, use of condoms, vaccinations, new and old medicines, folk treatments are the more obvious solutions. My conservative friends insist that the Covid-19 lockdowns were pure socialist policy. Their evidence for such a conclusion can be best be described as fallacious. Prominent citizens of countries on the Left and Right of the political spectrum have supported and opposed the lockdowns with equal fervour though for different reasons.

Some even went as far as saying that staying at home on furlough during the Covid-19 crisis, which is ongoing is socialist. These guys are unaware that socialist is a worker’s ideology for working people and that communist/socialist countries by law sent those who refused to work to jail for two years in the USSR and recidivists ended up in Siberian gulags! The Soviet Union did not become a global superpower with an idle population.

Nevertheless, I would like to read any text or scrolls that demonstrates catallaxy, deregulation, privatisation, spontaneous maximisation, price signalling, contested markets or methodological individualism, the magic wands of conservatism and free markets, are instruments for overcoming plagues. Or how neoliberalism, liberal capitalism, social democracy, socialism, communism all justifiably insinuate themselves on a remorseless plague. Such will be very interesting.

Whatever happened to human life first? Then the living can implement or run whatever system they choose for themselves. No! Conservative ideals are far too important, much more important than life itself. Yeah

END_OF_DOCUMENT_TOKEN_TO_BE_REPLACED

The “Sambo Scandal” (concerning one Col Sambo Dasuki) is just another story when compared to the full scale of looting in Nigeria; it’s just ‘Hot Air’ and Hollywood. The Government of Nigeria (GON) since the military regime of Yakubu Gowon has squandered around $1 trillion on nothing but personal enrichment and the provision of mostly shoddy goods and services to Nigerians. Call it the “national cake” (that has no bakery) or the “pot of soup” (that has no kitchen), Nigeria’s wealth is on a daily basis being shared like cake and soup at parties for and by the “Owners of Nigeria Technostructure” (ONT) and at their very own imperturbable convenience. This situation is incredibly far beyond the stilted fanaticisms of All Progressives Congress (APC) and People’s Democratic Party (PDP) supporters. END_OF_DOCUMENT_TOKEN_TO_BE_REPLACED

One of the most challenging experiences a Nigerian [or other African nationals] in Diaspora will ever face is encountered within the paradox of deciding either remaining in a foreign land permanently or going back home for good. END_OF_DOCUMENT_TOKEN_TO_BE_REPLACED

If Wikileaks has leaked nothing of the confidential and classified information relating to the workings, conditions and decisions of the International Monetary Fund, the World Bank, exploitation-driven genocides in the Third World, the arms trade, genetically modified foods, corruption, regime change, insurgency sponsorship et al, then it has said nothing of significant importance i.e. to anyone who properly understands history, international relations and human nature. So where is the extraordinary news from the leaks? END_OF_DOCUMENT_TOKEN_TO_BE_REPLACED

END_OF_DOCUMENT_TOKEN_TO_BE_REPLACED

Your piece is poignant and well written but discomforting to read, because it exposes issues of the “pitiful helplessness” and their resignation to it. The state is not going to help them. Instead the state wants to take their land, bulldoze their shanty towns, arrest them for trading without a permit etc. The poor have to survive often very desperate conditions. Even when they turn to crime it does not work out too well for them. The females do not have enough money to look good as prospective sex-workers and males soon get the message that they are easy to catch when they go on robbing missions. Yet, morality does not work very well on an empty stomach, soft and safer crimes are adopted. END_OF_DOCUMENT_TOKEN_TO_BE_REPLACED