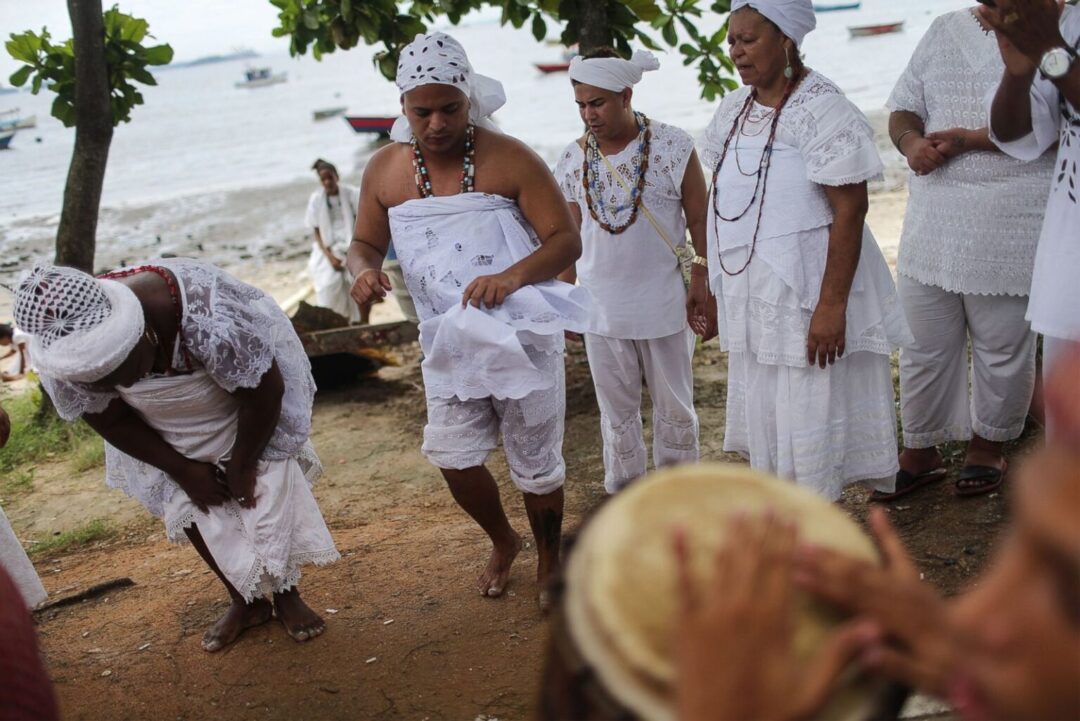 The Igbe Religion – A Faith

Igbe is neither my personal nor family religion, but I lived in Urhoboland, where it originated and people still practise it, long enough to observe the faith with considerable detachment. I have also seen its practice in the United Kingdom. It is an Urhobo religion but may not be only so. In this brief article, I intend to look at the more gnostic and historical perspective of Igbe than its practices. Igbe in the Urhobo language means “Dance” or “Joy.” Igbe worship is also an act of gratitude to God for life itself and comprises celebratory devotion.

“Gnosis of the Igbe” is a vocation in which the revelation of the knowledge of the divine occurs to male and female practitioners of the religion, provided they have a pure heart and mind. The white attire and headwear of the Igbe followers in worship symbolise stainless purity, which is reflected inwardly. The spark of the divine often awakens in the fervent celebration of God. Therefore, dance and song accompanied by drumming are indispensable. Music has the facility to stir the innermost emotions in people.

Igbe has three essential features that qualify it as a religion. Worship by dance and song is important for the connection between man and God. The second is its undeclared monotheism in which an unseen, unknowable God whose existence is only sensible through the purity of the heart and mind of man. The third is God does not manifest himself apart from man; words, song and mostly dance are the interfaces for the reception of the word from God and the expressions of men to God. The monotheism of Igbe upholds “One God,” who is omnipresent, omniscient and omnipotent, like many other monotheistic religions. Oghene (generic) or Ohweya is the name of One God of Igbe.

A plethora of accusations has left the beauty and ideals of Igbe as questionable. Demonism, superstition, and witchcraft are labels Igbe has had to endure since Christianity arrived. The irony was the religion originated to fight immorality and witchcraft in the community. The societal virtues of Igbe are that it is anti-oppression, anti-crime and anti-slavery. A real adherent of Igbe did not own indentured workers (Ovien, plural Ivien), would break none of the laid-down moral codes (as broad as they are covering most crimes and misbehaviour) nor oppress anyone in words or action.

Unsurprisingly, many of those persons who did own indentured workers den also would oppress others and practised plentiful crimes within the proximity of the reach of Igbe and were thus more comfortable in the Christian church. It was these same people who, apart from the demonization of the religion on Western premises, posed the most vigorous opposition to the Igbe religion. The tacit consideration of a pure heart and mind was too much to ask by various communities. The ease of obtaining forgiveness, mercy, and grace was much more convenient to them. Such an experience does not deny the fact many sincere Christian adherents practised their religion without manipulation.

Before anyone attempts to dismiss the Igbe religion and assert Christianity, it is a fact that the former is highly successful in institutional terms. Igbe institutions and rules primarily centre on the adherent taking responsibility for their actions. Hiding behind the mercy and graciousness of God is self-deception; the bounties of God come to followers through devotion and adherence to the permissions and prohibitions of the religion and impeccable moral compliance.

The dictum, Everyone Knows the Contents of their Hearts, is an apt summary of the responsibility of the worshippers. There is no overt premise for Igbe being evil or a dark art from its practice. However, over the decades, schisms adopting Mamiwata (mermaid) worship and animism have emerged. Such deviations brought in resemblances with idol worship. However, the proper form of Igbe worship survives up to this day robustly despite persistent hostility from Christianity. One or more schism of Igbe has adopted a syncretism of worship with Christian worship.

I am not sure if the Igbe religion is unique to Urhoboland. The Candomble [meaning: “dance in honour of the gods” of Brazil dress (all-white) make music (especially drumming), and dance in modes similar to the Igbe. However, their traditions have mainly been subsumed by the Orisha religion of the Yoruba, making it somewhat polytheist. Candomble might have started as a monotheist religion, but this is speculation. Puerto Rico and other central American nations have religious practices and traditions similar to Igbe. All these contemporary manifestations of Igbe in Nigeria, South and Central America seem to have occurred around the same time in the 19th Century or perhaps earlier but less visibly. What makes the Igbe of the Urhobos unique is that it is a monotheist religion. Does this make Igbe a prototype for similar forms of worship taken to or rediscovered by slaves in the Americas?

I am also not sure that the Igbe religion started with the Urhobo patriarch, Ubiesha, in the 19th Century in Kokori, Delta State, Nigeria. Some oral traditions say Igbe to have undergone a long line of cycles of rebirth and total decline over the centuries. Ubiesha is the most recent manifestation of the rejuvenation of Igbe. The apparition Ubiesha saw that was his trigger was the call for him to do what his distant ancestors had appropriately done until the practices fell into decay and forgotten. It was a call to draw his people to worship God, unseen but omnipotent. When the decline of Igbe in society is complete, if its adherents allow it to happen, another manifestation will appear to continue the cycle. However, the history of Patriarch Ubiesha will endure farther into the future than previous messengers have. The written word can be enduring.

Please take a look at my articles, From A Myth to A Cure: Where Does Africa Go After Vaccinations? and Nsibidi: Education in Nigeria Before Colonisation