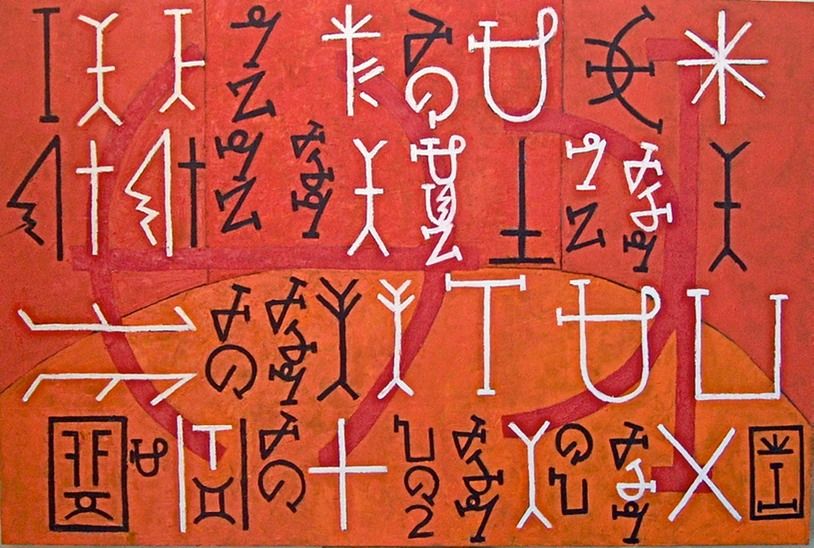 Nsibidi, a written form of language, was taught in formal pre-colonial schools originally, among the Efik-Ibibio and neighbouring tongues but more intensively in Igboland towards the middle of the Second Millennium AD. It is reputed to have begun in 400 AD, at the latest and was to survive until the early days of colonisation. The primary phenomenon that would discourage, destroy or supplant Nsibidi was the introduction of colonial Christian education in Nigeria.

Nsibidi is described as a complex mix of three language symbolisms. 1) Pictograms (written language standardised as a sequence of pictures like Egyptian writing on walls). 2) Logograms (written script in sequences of words like in the Chinese language). 3) Syllabograms (written alphabet in the form of the alternation of vowels and consonants). Nsibidi was useful in matters of warfare (strategy, codes and misinformation), organised justice (deliberation of cases, records of judgements, witnesses and evidence), codes of conduct, recipes, methods, techniques, directions and safety. Nsibidi was also useful as marriage certificates, expressions of love, records of events, diaries, deeds of ownership. Nsibidi was the basis of stable institutional activity in Igboland and Efik-Ibibio land.

The certificates, records and manuals were not written or documented on paper. Gourds, calabashes, pottery, sculptures, walls, slabs, doors, pillars, hides were mediums on which to write Nsibidi script. A calabash would be of high value to a couple because it held proof of their legal marriage. Slates were well-hidden because they contained proofs of land ownership. Herbalists may have scores of hand-held leather fans because they had medicine formulas written on them. Tattoos were also a popular medium signifying different things and meanings. Nsibidi was quite sophisticated for its time.

Proficiency in Nsibidi was the responsibility of members of its governing guild. Such guilds had strict membership criteria and had to swear oaths to not abusing their acquired competency after training. Guilds were commonplace in pre-colonial Nigeria and were responsible for the regulation of professions including midwifery, herbalism, arts and crafts, hunting, soldiering, wrestling, building, metal works and music. Contrary to early Western examinations of Nsibidi by missionaries and scholars, it was never an art of secret societies or fetish associations or demon worship. Nsibidi was the product of human inventiveness and necessity, not instructions from the Devil or demons. Nsibidi was part of the administrative policy to train children in numerous schools, and adults who had mastered it and joined the guild later became teachers or scribes of written form. Were the writers of the first or subsequent editions of Oxford English Dictionary a secret cult? I can assure you they were highly qualified and dedicated persons at Oxford University.

Slavery was to displace countless coastal West Africans from their homelands to Europe and the Americas. The people of South Eastern Nigeria were affected, and Nsibidi found its way as a well-memorised practice to the Americas. A fact much less known is that Nsibidi has survived in Cuba and Haiti. Along with Nsibidi, many relics of the Igbo culture are evident in the Caribbean. However, the concern here is with Nsibidi.

Is it true that Haitians under the command of Toussaint Louverture and Jean-Jacques Dessalines in a bloody twelve-year war defeated the French under Napoleon Bonaparte and became independent due to the unnoticed advantages of using Nsibidi? Do not be too quick to dismiss it. The French army might have seen the Nsibidi inscription on walls, slabs, leather, planks and other materials as superstition rather than organised and evolving war strategy. If this is true, the decline, loss and obsolescence have provided a devastating blow to the capabilities of the peoples of South Eastern Nigeria to liberate themselves from any internal or external oppression they have ever encountered.

Nsibidi is evidence of pre-colonial literacy and education in Nigeria. It is also proof that Joseph Conrad’s and Alfred Radcliffe-Brown’s grand descriptions of Africans are inaccurate and have been the bases of narratives that do not stand up to scrutiny. Colonisation too, came to undermine and not liberate Africa. Nsibidi is just another proof among many that should tell us Africans were not as backward as portrayed in the material that educates them.

The Government of Nigeria (GON) has sought to undertake a very unusual method of stopping or deterring “oil bunkering” in the Niger Delta; the use of military bombing for minor bunkering assets. This is a true example of the famed “fire brigade” approach associated with GON when seriously challenged with problems of technical, complex or elusive nature. It is easy for the GON to deploy Joint Task Force (JTF) and other heavy-handed security outfits to the Niger Delta with ‘genocidal consequences’ to “stabilise” the nation but it is surprisingly impossible them to make substantial and sustainable developments in the region or clean-up the heinous ‘ecocide’ manifested there endlessly. END_OF_DOCUMENT_TOKEN_TO_BE_REPLACED

When President Muhammadu Buhari won the 2015 general elections, he did so largely with the support of neutral and anti-PDP (Peoples Democratic Party) commentators. Everything bad in Buhari’s life history was to be forgotten and everything good was in ascendance. From another perspective, it was very difficult for practitioners of competent thinking to justify the pervasive profligacy behemoth of PDP while in power. The ministerial appointments Babs Fashola, Timi Amaechi and other ‘gubernatocrats’ that took more than half a year to make that was the start of the negation of support for President Buhari. Many thinking men deserted except the likes of Wole Soyinka turned their backs on and pens against Buhari. But many political miracles were promised by the Buhari government. Where are they? END_OF_DOCUMENT_TOKEN_TO_BE_REPLACED Fejiro Oliver of Secret Reporters recently wrote about his utter disillusionment with the Urhobos (his full heritage) and his embrace of the Anioma people. He cited his betrayal by Senator Ovie Omo-Agege as the reason for his chosen ethnic preference. He was poached by Omo-Agege from NTA to be a staff writer with Urhobo Vanguard newspaper set up to assist Omo-Agege in his gubernatorial ambitions. When Fejiro was kidnapped in Niger State for investigative journalism in 2014, Omo-Agege and the entire Urhobo nation turned their backs on him giving mostly unbecoming excuses. END_OF_DOCUMENT_TOKEN_TO_BE_REPLACED