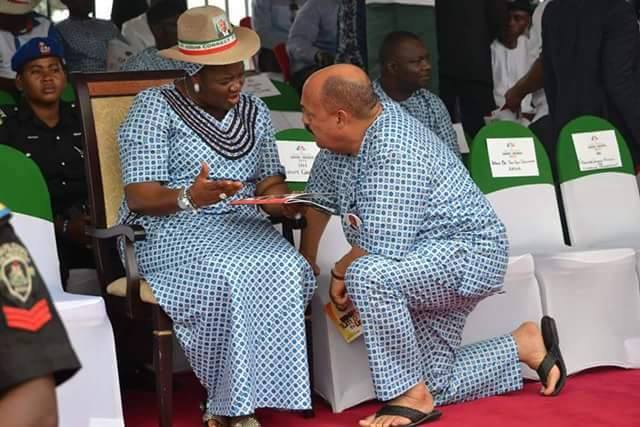 In the above photo we can see kneeling before the First Lady of Akwa Ibom State, Mrs Ekaette Akpabio, the usually imposing State Commissioner for Works, Don Etim in her husband’s executive cabinet, while conversing at a public event. While many Nigerians predictably may see this image as innocuous and just “one of those things” it is all by itself an embarrassing if not egregious image of Nigerian democratic politics.

Body language is an important component of politics, modern or ancient. Leaders, politicians, executives, administrators, have to project personal self-images of dominance, confidence and competence to the public especially in a democracy. Images of submission, obsequiousness, desperation and helplessness are the stuff “failure with the public”. Even in trying times those in government are supposed to look independent, able and self-respecting.

The narcissism of the Nigerian patron is well fed by a constant supply of kneeling downs and prostrations. Even the family of patrons especially wives also enjoy the narcissistic supply from clients usually reserved for the patron himself. Many governors and other elected officials may not be directly blamed for this dominant ritual since it is a part of a structured “pecking order”. The prospective governor before the election primaries has to kneel down or prostrate to his kingmaker and when he enters office then enforces it on those who seek his favour. It becomes a game of power.

We often here about present and future presidents, governors, senators, representatives, ministers, commissioners and other  political VIPs kneeling down publicly before their patrons or godfathers usually for support or forgiveness. Below we could see former permanent secretary of Delta State, Tony Obuh, publicly kneeling to win the support of Delta kingmaker, Chief E K Clark, in seeking support in his botched gubernatorial aspirations last year.

Former president Olusegun Obasanjo is “kneel down democrat supreme”. Known as a no-nonsense and unforgiving man, the only thing his confidants suggest to those seeking his support or forgiveness is to go to his Otta farm to prostrate (lie down) to him begging and swearing never to do anything thing that will offend him ever gain. Countless governors, ministers, senators have been subjected to this ‘ritual’ at Otta farm since 1999 and it was even suggested to President Goodluck Jonathan when he had a falling out with Obasanjo. However, the number one citizen refused and is paying the evident in former’s many antics against him.

All definitions of democracy begin to fail when the necessity of elected officials to kneel down to their patrons in the view of the public becomes paramount. It totally discounts discussion, dialogue and voluntary participation in politics as the hallmarks of a working democracy. Why would the public support such?

“Financial asphyxiation” is going to be a buzz word that will be popular with politicians (silently) and activists (openly) in future… I guess. Why? I will briefly and emphatically state that the core message and implication of the Wikileaks saga so far is: if you act against the interests of the owners of global and national political economies, legally or otherwise, your efforts will be annihilated through the mechanical ostracism of financial institutions. This is the story and anything else is neither secondary nor tertiary but at best quaternary. END_OF_DOCUMENT_TOKEN_TO_BE_REPLACED Upon reviewing the current upheavals in North Africa and elsewhere on the continent, I felt it is necessary for us – African academics, scholars and intellectuals – to take stock and a fresh look at ourselves: What role have we played in advancing the cause of liberty and improving governance in post colonial Africa. Our record is not very good. Sometimes, self-criticism is necessary in order for us to make progress. You do not have to agree with what I am going to say – diversity of opinion is healthy. There have been outstanding individuals among us who risked death to champion the cause of freedom in Africa. However, as a group we have let Africa down badly by not providing intellectual leadership to the democratic struggle. END_OF_DOCUMENT_TOKEN_TO_BE_REPLACED

END_OF_DOCUMENT_TOKEN_TO_BE_REPLACED

The ontology of the African is an emergent creature of exploitation, historical and contemporary. It started with slavery and colonisation. The late Dr Abdul Rahim Tajudeen, former head of the Pan-African Movement, was a fierce opponent of do-gooding foreign aid and charity. To him, when the African adopts the attitudes of the non-African towards the exploitation of Africa and its peoples, it necessarily creates serious concern. What disturbed Dr Tajudeen most was the contemptuous and cynical “image of Africa” exploited by non-African NGOs to raise money in non-African societies. These images of Africa were also used by African governments to secure odious loans by way of “begging bowl politics.” One thing that disgusted him was the regular incidences of immunisation aid projects used as “human experiment labs” on African peoples. END_OF_DOCUMENT_TOKEN_TO_BE_REPLACED

When it comes to attacking and witch-hunting the defenceless, or the underestimated, President Muhammadu Buhari has a heart larger than Zuma Rock – his machismo is unlimited; when it comes to dealing with major players in the Nigerian economy Buhari’s timidity is fantastic. In his anti-corruption campaign, Buhari has focused purely on the refund of stolen and the freezing of economic activity, causing much suffering and hunger in the land. Still, he dare not go against the oil companies that have raped Nigeria for what it is worth for over half a century. It takes more than average testicular fortitude to deal with such concerns and losses.

END_OF_DOCUMENT_TOKEN_TO_BE_REPLACED

Accepting failed leadership as a good thing is surprisingly very well-accommodated in Nigeria. “Excuses” are the most valued tools in the hands of Nigerian leaders, their clients and their supporters. There are no excuses made by politicians at election time but when the failure of elected leaders start to become very apparent and distinct, the last resort is to go to public relations professionals to cook up the next best excuse. And too many Nigerians cannot wait to embrace it unrelentingly. END_OF_DOCUMENT_TOKEN_TO_BE_REPLACED