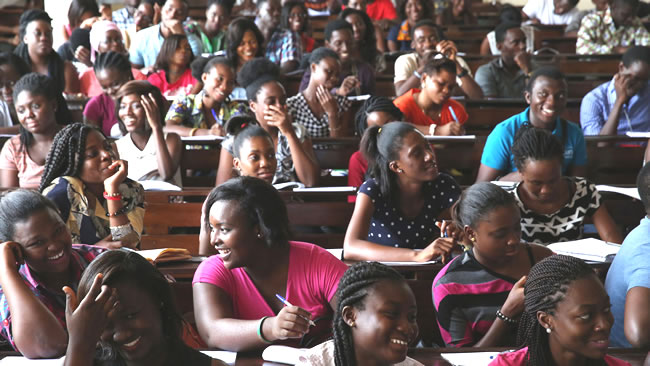 The ASUU Strike and the Crapious Revolution 5

“The neglect of a child is abuse; a nation’s neglect of its youth is wilful filicide.”

The other target of the Government of Nigeria that the Academic Staff Union of Universities (ASUU) are striking over is the fate and future of students in tertiary education. ASUU vehemently detests and protests, (1) the grossly over-populated classes they teach in dated small lecture theatres where students sit in windows, on steps, on the floor or even listen to from outside. (2) The poor funding that equips university science and engineering laboratories as if they are in the 19th century. So many science and engineering students do not experience lab work. Arts and humanities workshops, trips and materials are scarce resources. What will they do experiments or projects with? Research students pay for their research project tests, equipment and materials!

(3) The death-trap student accommodation puts the terms ’safety’ and ‘habitable’ to shame. The dilapidation of university hostels is an eyesore. (4) During exams, students sit shoulder to shoulder because seats intended for four students now sit ten. How can you then prevent cheating in exams? These inadequacies and others, often or even routinely frustrate lecturers; it undermines their capacity to train students to their very best, in many cases.

ASUU is taking on the students’ fight because they are left carrying the can. There was a time when Nigerian student unions were a competent force the GON had to reckon with. Student leaders with the backing of entire campus populations could effectively checkmate or reverse those GON policies that could emasculate university education The students’ revolt against President Babangida almost succeeded in chasing the man out of office. The days of formidable student union leaders of the National Association of Nigerian Students (NANS) like Segun Okeowo, Bukola Arogundade, Femi Falana, Olu Oguibe, Ogaga Ifowodo, Ubani Chima, amongst other greats, are gone.. NANS’ once voice of the Nigerian youth may now be a shadow of its former self but it’s not dead. The unheard cries, frustrations and fears of students and youths cannot be ignored forever.

For some years, the Government of Nigeria (GON) has tried to introduce minimum tuition fees of N1.2 million. When the ASUU asked how students would pay the fees in a country, where the GON cannot pay N30,000 a month minimum wage? The GON’s answer again was from the globalisation playbook: they will establish a Student Loan Bank. It takes on average 5 to 8 years for a graduate to get a job after graduation in Nigeria and the average starting salaries are N50,000.

Life-long debt peonage was not the idea when establishing educational institutions in poor developing countries. Have Africans not suffered enough slavery? Many have proven beyond reasonable doubt that the taxes university educated professionals earn in mid-career in a year cover the cost of free education. Why is debt peonage so fanciful to the GON?

The fawning Nigerian government must obey foreign dictates, though. Or should they?

The youth and older people must ask themselves some pertinent questions.

Is Nigeria producing too many graduates? China and India combined produce over 4 million graduates yearly. And Nigeria has the largest proportion per capita of illiterates in the world. Woooooooooo!

Is the GON’s predatory soul scared of the democratic, intellectual and political power of a large educated youth that can overthrow its gerontocracy at the ballot box? Too few geriatric patients hold most of the political and economic power in Nigeria. But for how much longer?

there are more question to be asked about the issue but these are a good start,

Nevertheless, let us not blame only foreign dictates for the crushing of the Nigerian youth and their education. The main culprits are Nigerians in power who stash their families overseas in safer nations for education and safety.

Even though we are just addressing education here, the evidence is abundant that the GON doesn’t care about its vast youth. The youth has woken up to an unmissable fact: they are on the losing side of the Two Nigerias. The ASUU strike has just made it so much clearer to them.

To be continued in The ASUU Strike and The Crapious Revolution 6.

1 thought on “The ASUU Strike and the Crapious Revolution 5”