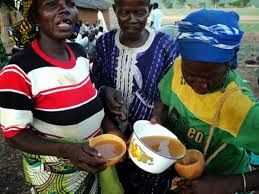 The beverage gives users two different kinds of “highs” simultaneously with unpredictable outcomes, especially for a novice and depending on the alcoholic content, igbo potency and amount consumed. There is also the case of synergy where, for example, ten UOI of ogogoro plus ten UOI of igbo can cause thirty-seven UOI when consumed.

Today, Monkey Tail is seen by Nigerians as a popular masculine drink. Street boys are believed to abuse it recklessly, mostly as an agent of Dutch courage and ‘escape’ from the trials of street life. While at the higher echelons of the social structure, gentlemen are most likely to drink it responsibly and mostly for sexual purposes. Women who drink Monkey Tail would by default be perceived to be wayward or unwomanly.

Xclusive Magazine uncovered that Monkey Tail throughout the 1980s and 1990s was a common ‘date-rape’ drug in Nigeria. At tertiary institutions of learning or in towns, the parties are thrown by young men often served Monkey Tail variants as “punch”. Similar to the punch cocktails, the variant in question was mostly a concoction of Monkey Tail (primary ingredient), other spirits, dessert wines, Ribena, bits/slices of fruit and sometimes Guinness or palm-wine. Sweeteners and other additives were introduced to mask the sickly taste of marijuana. Some desperate guys even added barbiturates.

At the parties, usually small and intimate, called “mellows”, decent food would be served to all the girls with the fruity and delicious “punch” before any male. The girls loved the punch, especially when ice was available. The unwitting girls were having a good time for all they cared. Then the dancing would start in earnest, and within an hour, one could observe all the social inhibitions of the girls had fallen flat with them laughing at each other’s antics. Not too long after that, they would pass out.

Whatever happened to those girls often remains a secret to this day. Still, one source who spoke to Xclusive Magazine on condition of anonymity confessed that the primary purpose and outcome of the parties was rape. A lot of girls had compromising photos taken of their naked bodies or engaged in sex with a guy whose face could not be seen while theirs were. Many of these girls ended up being blackmailed for money and sex by the party throwers. It was claimed that many thousands of girls were forced into part prostitution as a result of the ensuing blackmail.

The source volunteered the information to Xclusive Magazine after openly confessing his sins to an undisclosed church congregation. He said he had discovered what is now known as Monkey Tail as a date rape drug by accident. He had given it to two girls who visited him on their insistence at his one-room apartment in Benin-City while he was a teacher there in 1979. He went on to have sex with the girls as they had become unconscious and he spread passed the word.

It was to become a scheme he and his friends exacted for several years on women with increasing sophistication, especially while he was an undergraduate. He also possessed many compromising photos of naked women. Today he claims to be repentant and sincerely regrets his actions.

Monkey Tail has undoubtedly had a silent but evil history. What is it used for these days?

Nigeria is still in its “supposed” anti-corruption mode from a governance perspective, but the current state of the economy is not going to permit its success no matter how hard the country tries or well-meaning the leaders might be. There is a highly overlooked aspect of corruption that directly results from macro-economic requirements, whether it is self-determined or imposed by multilateral agencies. The devaluation of currencies particularly in developing countries exacerbates the incidence of corruption. END_OF_DOCUMENT_TOKEN_TO_BE_REPLACED

The third instalment of The Leadership of a Bad Brother has the same context and focus on the first two. The random presentation of thoughts is intended to reflect the haphazard manner by which victims of bad organisations and bad leaders order their thoughts privately. Some respondents have questioned where this diary is heading. The author intends to open a dialogue with readers about direct personal experiences of tyranny/abuses, within any kind of setting they have worked or belonged. Whether it is a voluntary organisation, corporation or government agency. The participation of the reader in this dialogue can make open that which is hidden and potentially held change things. Not many contributions received so far.

END_OF_DOCUMENT_TOKEN_TO_BE_REPLACED

Some sincere African intellectuals are genuinely dismayed about the derisory status of the African among other human beings in the world. It is the stuff of an ontology that remains the same today as it was in yesteryears. The sources of occasions for being dismayed are numerous, especially the treatment of African immigrants in Diaspora and images of Africa in the media. The unexplained detentions, sporting racism, police brutality, rough deportations, slave jobs, denial of guaranteed social amenities, human rights violations. The inhumane experiences by migrant Africans in nations who have taken it upon themselves to be the leaders and moralisers of the free world are more than contradictions. END_OF_DOCUMENT_TOKEN_TO_BE_REPLACED

END_OF_DOCUMENT_TOKEN_TO_BE_REPLACED

The South West has now been, rightfully or wrongfully, disaffected by President Muhammadu Buhari and his “Northern Bloc”. The unholy alliance between the North and the South West fostered for the 2015 elections in Nigeria is over. Buhari’s parking ex-Governor Bola Tinubu into the corner is tantamount to parking the entire South West into the corner. Tinubu has been outsmarted in every department by Buhari and some. END_OF_DOCUMENT_TOKEN_TO_BE_REPLACED